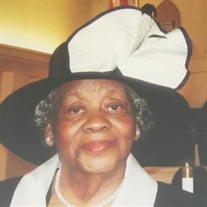 Ailene Ellis McGill peacefully went home to the waiting arms of her Lord and Savior on June 18, 2018. Ailene began her earthly journey on May 29, 1929, the ninth child of eleven born to Bloomfield and Millie Davidson Ellis in Gaffney, SC. Ailene was educated in the Gaffney public schools. At the age of 14, she joined the family church, Ebenezer Baptist Church in Gaffney. Ailene was joined in holy matrimony to Arthur McGill, Jr. on January 4, 1948. From this union two children were born, Betty McGill Evans and David McGill, Sr. Ailene and Arthur moved to the Washington, DC area on January 15, 1950. She joined Mt. Sinai Baptist Church in Washington in 1952, under the leadership of Reverend Charles C. Hayes. In 1963, she followed Pastor Hayes when he founded St. Charles Baptist Church. She served St. Charles faithfully in many capacities as financial secretary of the Security Committee, president and later treasurer of the Pastor’s Aid Club, president of the Willing Workers Club, president of the Benevolent Chorus and then its financial secretary, president of the Usher Board plus the Junior Usher Board and President of the Condolence Ministry, as well as a long-term member of the Kitchen Committee. Ailene was also very active in raising funds for the church by organizing many bus trips, preparing food for and selling many dinners, plus chairing several programs at the church. Her favorite event had to be the Friends and Family programs which her friends looked forward to each year. Ailene was employed for over 40 years as a House Keeper and Care Giver for the Kuehl Family. During this time, a great, loving relationship developed between Ailene and the Kuehl’s. She considered Katie Kuehl McCoy and Marion Kuehl Applegate to be like her sisters and their children as hers. When Mr. & Mrs. Frank Kuehl became ill later in life, Ailene rallied family and friends to assist in their care to ensure they were cared for around the clock. Ailene loved and was loved and cherished by that family until her passing. Ailene is known for her enormous sense of humor as she loved bringing a smile or laugh to everyone she encountered. On many of the bus trips she took, she told jokes all the way to the destination and all the way back. Everyone she knew looked forward to her jokes. She also had the “gift of gab” so could and would talk to anybody that would listen. She was the life of any event. She was so loved by all she met from the youngest to the oldest. She was an excellent cook and loved to cook for large crowds. Two of her specialties were pound cake and sweet potatoes and she loved sharing them. Ailene, over the years, had several really close family members and friends who she always enjoyed talking with on the phone, going to lunch or dinner, traveling with and just visiting. They included Terriza Jefferies, Sara Curtis, Rueben Davidson, Inez Dawkins, Lillie Ellis Jones, Janie McGill, Thelma Sessions, Betty Powell, Elizabeth Crump, Olivia Dixon, Barbara Carroll, Shirley Worsley, Betty Graham McGill, Pearly Mae Williams, Ethel Brown, Joycee Jefferson, Morning Vines, and Laura Saxton. This is just a few of the many. Ailene loved her friends, but she loved her family even more. Nothing made her happier than being with and cooking for them. She loved attending all of the McGill and Davidson family reunions. She even organized and sponsored a family reunion for all of the children of her siblings. That brought her such joy seeing them all together and she never forgot that. Thank you all that attended that event! Ailene is survived by her two children, Betty McGill Evans (James, nicknamed Tommy) and David McGill, Sr. (Doris). Grandchildren include Andrea McGill Pryor (Sonny), Caletha Ellerbe, David McGill, Jr. (Monica) and Serge’ McGill, Sr. (Erika). Great-grandchildren are Alicia and Alonzo Pryor, Amika Randolph, Damarrco McGill, Bryant Henson, Nevaeh, Samyi’, Serge’, Jr. and Naomi McGill. She is also survived by Goddaughter, Althea Washington and Godson, Darvin Jefferies. She is survived by one brother, Nathaniel Ellis of Gaffney and many nieces, nephews, and cousins. Ailene’s husband, Arthur predeceased her in 1997. Her siblings who predeceased her are L.D. Ellis in 1983, Leroy Ellis in 1983, Irabell Borders in 1990, Sam W. Ellis, Sr. in 1993, Catherine Ellis in 1993, Robert Lemuel Ellis in 1994, Marie Epps in 1999 and Rosie Lee Bridges also in 1999. A brother, James, the first born of all her siblings; died in infancy.

Ailene Ellis McGill peacefully went home to the waiting arms of her Lord and Savior on June 18, 2018. Ailene began her earthly journey on May 29, 1929, the ninth child of eleven born to Bloomfield and Millie Davidson Ellis in Gaffney, SC. Ailene... View Obituary & Service Information

The family of Ms. Ailene McGill created this Life Tributes page to make it easy to share your memories.

Send flowers to the McGill family.