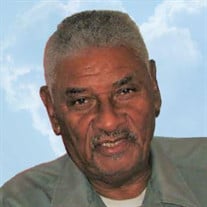 “And whosoever liveth and believeth in me shall never die.” John 11:26 Andrew Belton Sr., (“Pops” as he was affectionally known as), was born on November 27,1927 in Ridgeway, South Carolina to the late William and Julia Belton. He was the 11th of 13 children. Andrew entered eternal life on Sunday morning at Washington Hospital Center on February 6, 2022 in Washington, D.C. At an early age he was Baptized at Calvary Baptist Church, Ridgeway, South Carolina. Andrew was educated in the Fairfield County Schools System, where he met and married Johnnie Mae Bratton. Shortly after marriage they moved to Washington, D.C. and from this union there were 4 children. Andrew worked and retired from Labor's District Council after 45 plus years of service. He helped build hundreds if not thousands of buildings in D.C., Maryland, and Virginia. He knew this area like the back of his hands because he helped built most of it. Pops greatest joy was to spend time with family and friends. He had an outgoing personality and loved to entertain. His voice could get the attention of everyone in a room. He had an amazing sense of humor and enjoyed cracking jokes. You would see him sitting on his porch talking to everyone that walked by. Andrew had so many stories that gave you wisdom and laughter. Andrew Belton was a welcoming, loyal, loving, and giving man. He loved the Lord and God’s love radiated through him. He would give to churches, St. Jude Children’s Research Hospital, his neighbors, family, and friends. Everyone knew who they could turn to in a time of need. He was a perfect picture of what being strong, supportive, and reliable meant. He really cared. Andrew’s door was always open to anyone. People always called him on the phone, stopped by to visit him daily, and everyone enjoyed his company. His house was the hangout spot to many. He raised his four young children on his own after his wife died when he was in his early thirties. Andrew also helped raise his grandchildren and great grandchildren with arms wide open giving them a room in his house, helping them finish basic school and college, opening his home to holiday/birthday/graduation/prom celebrations, and supplying all their needs over and over. He allowed people to stay with him, he allowed his neighbors to use his yard to grow fruits & vegetables and he allowed his neighbors to sit on his porch even when he was not there. Everyone was welcomed at Pops’ house. He loved baseball. Pops played sports in local teams all his life even as a senior citizen and was a huge fan of the Orioles. He enjoyed cooking and everyone loved his sweet potato pies, fried chicken smothered in fresh homemade gravy with rice, oxtail, and cornbread. He would bake over ten pies from scratch for the holidays and give them to his friends and family. Pops made his coffee every morning and cooked for his family and friends even up till 94 years of age. Not only that, but Pops also loved to host every holiday celebration at his house and never took a year off. He got around and did it all. He was half man and half AMAZING! Andrew leaves to cherish his memory of love and laughter, one son, Thomas Belton, daughter-in law, Sandra Belton, a sister in- law, Bessie Hall; three siblings, William Belton, Nancy Exum of Washington D.C.; Carrie M. Able of Ridgeway, South Carolina; (five)-Grandchildren; Carlette Oluyomi, Tequila Belton, Tanzanyika Belton, Tanjier Belton , and Richard Belton, (seven)- Great grandchildren Talecia and Tiondra Belton, Mika Harrison, Tussah, Mikhail and Lee Buggan, Keith Brandon Quarles, 1-Great - great grandson Charles Belton. Marlene Oliver; close family friend, a host of nieces, nephews, and cousins whom all loved and will miss him dearly. He was preceded in death by his wife: Johnnie Mae and his children: Andrew, Rosa, and Richard Belton; also 6 sisters and 3 brothers. “ We are confident, I say, and willing rather to be absent from the body, and to be present with the Lord.” 2

The family of ANDREW BELTON SR created this Life Tributes page to make it easy to share your memories.

“And whosoever liveth and believeth in me shall never die.” John...

Send flowers to the BELTON family.