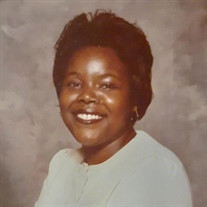 A Time of Sunrise Annette Jessie was born August 12, 1954 in Chappells, SC to the late Lucy Jessie. She was 1 of 11 children and the twin of Jeannette Quarles. She was educated in Washington D.C. and graduated from Calvin Coolidge High School in 1972. A Time to Plant Annette was married to Coley Quarles and was blessed in that union for many years. She was blessed to have 2 sons Anthony L. Jessie and Michael D. Jones, she also has two grand children, Mikea and Toni, and a host of nieces and nephews who she loved dearly. Annette was well like and loved by the people she worked with as well as her neighbors and friends. She worked many years for the Metropolitan Police Department for the District of Columbia in Identifications and Records. She enjoyed the music of artists like Gladys Knight, Frankie Beverly, and Luther Vandross, and nobody did it like Patti Labelle. She truly enjoyed spending time with her family and friends. She was affectionately known as, Ann, Aunt Ann, and Hey Bae by the friends and family from our neighborhood. Annette was unique and had a very loving soul, Annette wore a smile that lit every room she entered and will be greatly missed. A Time of Sunset Annette transitioned from suffering in her mortal body to reward of a new body as she completed her contract of purpose on January 25, 2021. She is preceded in death by her mother Lucy Jessie and siblings, Barbara Cherry, Willie Brown, Joe Brown, John Henderson, Curtis Barr and Jeanette Jones. Annette is survived by her sons, Anthony Jessie and Michael Jones, Grand Daughters Toni Jessie of Pittsburgh and Mikea Hawkins of the District of Columbia and a great grandson. She also leaves to cherish her memories her siblings, James Brown, Sara Leaks (Johnny), Calvin Brown (Karen) of South Carolina and Bettie Smith (Charles) of Michigan, a host of nieces and nephews and best friends.

A Time of Sunrise Annette Jessie was born August 12, 1954 in Chappells, SC to the late Lucy Jessie. She was 1 of 11 children and the twin of Jeannette Quarles. She was educated in Washington D.C. and graduated from Calvin Coolidge High School... View Obituary & Service Information

The family of Annette Jessie Quarles created this Life Tributes page to make it easy to share your memories.

A Time of Sunrise

Send flowers to the Quarles family.