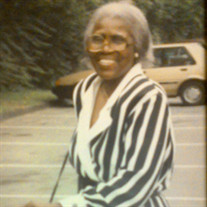 Azzie Lee Halley Booker was born in Tuscaloosa, Alabama on December 17, 1918. Her parents were Doshie Wilkerson Booker and Father Willie Halley. She was raised by her mother and stepfather Willie Booker in Clearwater, West Virginia and later moved to Louisville, Kentucky who are deceased along with her Grandmother, Drucilla Wilkerson and Grandfather Anthony Wilkerson, Fannie Wilkerson (Great-Grandmother), Pearl Wilkerson (Uncle) who served in (WWII), Pinky and Lucilla Wilkerson (Aunts), Lubelle Wilkerson, Drusilla Wilkerson, Elmo and Isaiah Wilkerson, (Cousins). After attending Kentucky Public Schools, she later worked in the Hospitality industry before relocating to Washington, D.C. for a better life. She worked in various industries during her work tenure. Her last employment was with St. Dominic’s Catholic Priory in Washington, DC in SW. Azzie was a diligent, dedicated and efficient worker in being responsible for the Brothers and Catholic Priest who resided at the Priory with Seamstress and Clothes Care. She learned how to ride a bike, swim and took piano lesson from Lucille Banks Robinson School at the young age of 50. She retired after 20 years at the age of 80 from St. Dominic‘s Church and was given a farewell retirement party by the church on December, 2000. She spent her spare time after retirement visiting the sick, missionary with the church, outreach and spending time with her Daughter, Phyllis A. Clark, Grandchildren, Great-grandchildren and friends on occasions. She enjoyed traveling, gospel music, attending church programs, sightseeing, nature, the outdoors, watching the Olympics Ice skating and wrestling, etc., on T.V. and loved a challenge to a math problem, cooking for her family and extended family and friends anytime. She was a Humanitarian who loved all animals of all type. She once rescued a stray cat that frequented her neighborhood and took him to the Vet on the bus in a cardboard box to be seen, who was diagnosed with cancer. She also cried over a goldfish that accidentally went down the kitchen sink while she was cleaning the fishbowl. She had a heart of “Gold”, very loving and caring being. She was very witty, funny and always willing to help anyone in their time of need. She took her grandchildren when small to church, sightseeing, on various outings, picnics in the parks with their friends and sometimes involved them in rummage sales projects in her neighborhood park where they gained sales experience and learned how to make their own money while having fun at the same time. She leaves behind 1 Daughter, Phyllis A. Clark and her Grandsons, Cornell F. Evans, Jr., Christopher Cornelius Evans and Cedric Maurice Evans, Sr., and Step-Grandson, Kenny Evans and Step-Granddaughter, Chontae Evans. Great-Granddaughters are Deonna Menetra Evans, CeShelle Ariel Evans, Cherie Evans, Ahjai Kelsey Evans, Jasmine Evans, Brandy and Angel Ivey. Great-grandsons, Jamal M. Evans, Akanni Evans, Jacari Roberts and Cedric M. Evans, Jr.

Azzie Lee Halley Booker was born in Tuscaloosa, Alabama on December 17, 1918. Her parents were Doshie Wilkerson Booker and Father Willie Halley. She was raised by her mother and stepfather Willie Booker in Clearwater, West Virginia and later... View Obituary & Service Information

The family of Azzie Booker created this Life Tributes page to make it easy to share your memories.

Send flowers to the Booker family.