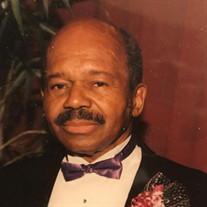 Remembering Benjamin Burnett. Benjamin Burnett was born on April 20, 1928 in Newport News, Virginia. Benjamin grew up in the Newport News Virginia area with his three brothers and one sister. He obtained his education within the Newport News School System. After completing High School, Benjamin joined the US military, where he served in the Army during the Korean War. After serving his time in the military, Benjamin moved to the Washington DC area where he soon established a long successful career as a Mail Clerk working at the US State Department. Benjamin retired from the State Department after working there for nearly 40 years. Benjamin soon married Mattie Tate and to this union was born three sons Bruce, Gregory, and Tony. Mattie was the love of his life and best friend. Benjamin remained married to Mattie until her death in 2014. Benjamin departed this life on July 1, 2018 and will be truly missed. He was a devoted husband, father, grandfather, great grandfather, uncle, brother and friend. Benjamin was pre-deceased by both parents, his wife Mattie Burnett, his oldest son Bruce Burnett and his three siblings Kenny, Howard and Sally Burnett. Benjamin is survived by two sons andspouses Greg (Renata), Tony (LaTarsha), daughter-in-law (Mona), eight grandchildren, Tineisha, Kelsey, Tony Jr. Taylor,Filip, Valentina, Samuel and Nadia, two Great grandchildren, Darien and Autumn and a host of nieces, nephews and friends.

The family of Mr Benjamin Ruffin Burnett created this Life Tributes page to make it easy to share your memories.


Benjamin Burnett was born on...

Send flowers to the Burnett family.