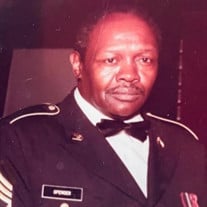 Spencer also loved to learn, which led him Charles Thaddeus Spencer would tell anyone who listened that the Good Lord promised “threescore and ten.” Well, the Lord outdid himself and blessed Charles with 86 years on Earth and everlasting life before calling him home at 4:57 a.m., Friday, January 7, 2022. Charles was born to the late Thaddeus and Etta (Gibbs) Spencer in Tyrell County, N.C. on November 28, 1935. The youngest of thirteen children, Charles was nicknamed “Charlie Boy” early in life. He was raised in Creswell, North Carolina where his parents taught him to love God, family, community, country, and himself. Charlie Boy attended St. Mary’s Disciple of Christ Church as a child. He played basketball at Creswell High School before dropping out and running away to join the military at the age of sixteen. As he became a man, Charlie Boy also became known as “Spencer” – a name he embraced with equal affection. Spencer settled in Washington, D.C. - a world away from his rural upbringing in Creswell. He enjoyed rewarding careers in the United States Military, the United States Government, and the private sector. Spencer served in the Marines as a Hand-to-Hand Combat Instructor during the Korean Conflict; the Army, where he was awarded the Minuteman Award; and the National Guard Reserves 276 MP. In the military, Spencer was a leader and a technical expert in weaponry. Spencer toured the world with his favorite destination being Cairo, Egypt; and reached the distinguished rank of Sergeant First Class before he retired. As a civilian, Spencer held positions at the U.S. Printing Office, the National Rifle Association, and the National Mediation Board. Spencer retired from the National Mediation Board in 1991. Spencer loved to work, and he was proud of his work. After retiring from the U.S. Military and the National Mediation Board. Spencer enjoyed decades-long career as a Special Police Officer with several private companies in Washington, DC., including Colorado Security Company. Spencer worked as a Private Police Office well into his early 80s. to earn his General Equivalency Degree (GED) at the age of 48. Spencer dedicated himself to learning the principles and teachings of Prince Hall Freemasonry. Spencer was well known for his affection for barbequing, hand dancing, bus trips and The Young and the Restless. Spencer was preceded in death by his wife of more than 40 years, Jean E. Spencer (mother of Jo-Ann); 7 brothers, Olian, Elmo, Herman, Agnes, Earl, Harvey, and Burnes Spencer; and 4 sisters, Mamie James, Willie Bell Davis, Lemon Leary, and Marie Sorey. Spencer is survived by his wife of 20 plus years Nina Delores Spencer; two daughters Jo-Ann Spencer, Washington, D.C; and Delores Jeffries-Spencer, Nashville, Tennessee; two step children Denise M. Bethea and Anthony T. Bethea (Brenda), Clifton, Md; five grandchildren Deron R. Spencer; Michael T. Spencer (Justin Stephens), Washington, D.C.; Moses Jeffries (LaToya); Brian Jeffries (Francesca), Nashville, Tennessee, and Jeannai E. Spencer, Washington, D.C; 3 step-grandchildren, 9 great grandchildren, and a host of nieces, nephews and friends.

Spencer also loved to learn, which led him Charles Thaddeus Spencer would tell anyone who listened that the Good Lord promised &#8220;threescore and ten.&#8221; Well, the Lord outdid himself and blessed Charles with 86 years on Earth and everlasting... View Obituary & Service Information

The family of Charles T. Spencer created this Life Tributes page to make it easy to share your memories.

Send flowers to the Spencer family.