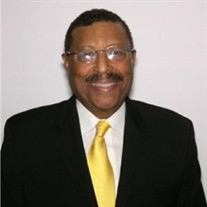 Curtis Owens, a former health care executive, died on Sunday, Dec. 25, 2016. He was 78. He was born on Oct. 18, 1938 to the late Curtis Owens and Sara Ames Owens. He became achievement-oriented at an early age. By the time he graduated from... View Obituary & Service Information

The family of Mr. Curtis Owens Jr. created this Life Tributes page to make it easy to share your memories.

Send flowers to the Owens family.