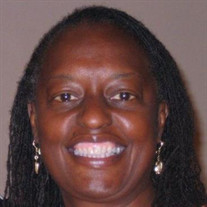 On January 3rd, 2017 Cynthia Hopkins-Brown, also known by many as Mudiwa, passed away on her own terms, at home, gently and without pain. She was loved and surrounded by her husband Rick, her mother Adelaide, and devoted son Dwayne. Also by her side were her close friends Jackie and Cerissa. She was loved by so many, and will surely be missed. Memorial services will be held on January 16, 2017 from 11am – 1pm at the Twelfth Street Christian Church, 1812 12th Street, NW, Washington, DC 20009; and the repast from 1pm – 3pm next door at The Thurgood Marshall Center, 1816 12th Street, NW, Washington, DC 20009. Cynthia Hopkins-Brown Cynthia has been very ambitious and incredibly focused her entire life. She has constantly studied personal growth and has always kept an eye on both short-term and long-term goals, and never strayed from her path of success. Her husband, Rick, used to tease her about being born with 3 by 5 cards in one hand, and a pencil in the other, in order to continue updating the list of goals that she began while impatiently awaiting her birth; a habit she never lost and always followed with great success. She put herself through college while raising her son Dwayne, and working full-time. Although very difficult, things went well. Her degree is in Computer Science, and she was already well established in the field when she graduated from school. She bought her own home, and enjoyed rapid career advancements. Always seeking out new adventures, she ran a number of side businesses. She was first successful in network marketing, followed by real estate investing and sales, being a part-time mortgage broker, closing agent, notary public, and many other business ventures as well. She soon became known as the go-to person for any task that needed to be done. An extremely large number of friends came to rely on her for a variety of things. She always had a knack for quickly becoming best friends with a stranger, no matter how confrontational the person was upon first meeting her. She always loved to travel, and has visited Hawaii, California, Colorado, Illinois, Arizona, New Mexico, Pennsylvania, New York, Connecticut, North and South Carolina, Florida, Georgia, Kansas, Oklahoma, Texas, Louisiana, Mexico, the Bahamas, England, France, and Egypt. She would put her car on the Auto Train to Florida or take a flight anywhere in the world as quickly as the rest of us would only drive around to nearby places. Her real estate investing has taken her to many locations, but she also liked to relax on the beach when in Mazatlan, Mexico, and ride the Big Eye when in London. Whenever she was in London, she thought nothing of riding the bullet train or an enormous hovercraft across the English Channel to Paris for a day, in order to shop at Louis Vuitton. (A store where she never actually bought anything big, but that’s another story). Her latest adventure involved multiple trips to Egypt, as part of a team excavating a newly discovered archeological find, where she helped uncover and identify fragments of an ancient civilization. She has traveled the world as she only imagined doing as a child, and has taken for granted the exalted state she has achieved. She has raised a successful son, has several wonderful grandchildren, and had always kept in close contact with her mother and other family members. She was an extremely positive role model for all who know her, and she has taken a very active part in educating her grandchildren to all that life can offer, not just what children would imagine. She always looked just like she did as a teenager, and always had ID with her so any business that restricts youth would not turn her away. She was truly an amazing woman, one who has accomplished what many people don't even dream about. Cynthia has now ignited her light, and it is shining brightly across the entire world as a beacon for all to follow!

On January 3rd, 2017 Cynthia Hopkins-Brown, also known by many as Mudiwa, passed away on her own terms, at home, gently and without pain. She was loved and surrounded by her husband Rick, her mother Adelaide, and devoted son Dwayne. Also by... View Obituary & Service Information

The family of Mrs. Cynthia Hopkins Brown created this Life Tributes page to make it easy to share your memories.