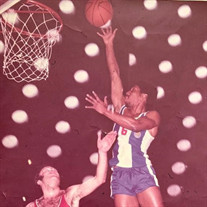 Dale Warren Dover (b. August 2, 1949) died peacefully on Monday, January 14th at the age of 69, succumbing to a private battle with cancer. Scholar, Athlete, Coach, Diplomat, Linguist, Juris Doctor, Mayor, Youth Advocate, Father, Grandfather and Friend, Dale was a renaissance man to all who knew him. He was committed to forging a pioneering life path, with an eye towards disrupting the status quo, demanding excellence and righting injustice — all while entertaining his audiences great and small. Dale was born in New York City to Thomas Alfred Dover of Boston, MA and Virginia Elizabeth Carter Dover of Frostburg, MD and was the middle son of five brothers and one sister, Freddy (d.1955). While a middle child by birth order, Dale strived (in all things) to be first. A NY All-City Basketball star, Dale emerged from a housing project in the Bronx, New York to attend Harvard University. He led the Harvard Crimson Basketball team to a top ten national ranking. As a senior, Dale was recruited to play for both the Boston Celtics and Harlem Globetrotters. Ultimately, he chose to be player-coach for the Portuguese National Basketball Team, where Dale’s achievements were so significant that the team installed a bronze statue of his likeness in their museum 43 years later. Dale’s early time abroad sparked a lifelong interest in foreign language and culture, leading him to join the US Department of State in 1974. While holding the post of Vice Consul in Denmark, Dale was asked to coach the Danish National Basketball team, a first for an American national. Following this assignment in Denmark, Dale was appointed to a Consul post in Tel Aviv, Israel, in the wake of the Camp David Peace Accords. Dale subsequently returned to Cambridge, MA with his young family (including daughter Lauren and son Noah) to earn a JD from Harvard Law School, while also serving as a proctor and teaching Freshman writing. In 1984, the family put down roots in Virginia and Dale began his new career as a corporate attorney. However, he yearned for something more rewarding for this next career chapter. Despite having no prior experience in the political realm, Dale ran for and was elected to the Falls Church City Council and went on to become the City’s first African-American mayor in 1990. Dale’s passion for helping young people eventually became his career when he opened his own law practice in Alexandria, Virginia over 25 years ago. While his door was open to all, Dale felt strongly that children needed an advocate in the court system and devoted the balance of his career to doing just that in the city of Alexandria. In the words of one judge, “if you were a child in the court system, there was no better person to have on your side than Dale”. Most recently, he also worked as a labor relations attorney for Alexandria Transit Company (DASH). While Dale’s life achievements were impressive, it was his life philosophy that set him apart. He never stopped learning, striving and exploring — Dale was fluent in Mandarin, Portuguese, French, Danish, Hebrew, Swahili and most recently picked up Arabic. He took every opportunity to return to his beloved Portugal or Harvard to play basketball “with the young guys”, but also periodically chose far flung places throughout the world to visit and expand his horizons. Juxtaposing this sense of adventure was a commitment to his local communities — and he will be deeply missed by his friends at the Alexandria YMCA, Public Library and Bar Association. He leaves behind two children, Lauren and Noah; four brothers, Harry, Randolph, Thomas and Paul; and five beloved grandchildren, Maya, Rhys, Cadence, Sienna and Blake. The family would like to thank good friends Leslie Williams and Doug White and brother Paul Dover for their dedication to Dale during his illness. A Celebration of Dale’s extraordinary life will be held on February 1st at 3:00pm on the basketball court of the YMCA Alexandria (420 East Monroe Avenue, Alexandria, VA 22301). Dale visited the Y almost daily for over 25 years and shared his love of this special place with family, friends and colleagues. In lieu of flowers, family and friends are creating a memorial fund that will focus on the social causes that were most important to Dale. More details will be shared in the coming weeks.

The family of Mr. Dale Warren Dover created this Life Tributes page to make it easy to share your memories.

Send flowers to the Dover family.