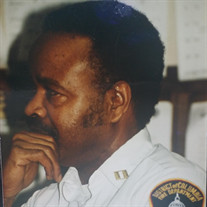 Edward Allan Lucas (74), Navy Veteran, retired DC Fireman and a Tantallion resident for over 25 years, in Fort Washington, MD, peacefully tranisitoned into eternal rest on Saturday, June 22, 2019 at Corkran House Assisted Living Facility surrounded by friends and family after an 11 year journey with Alzheimer's/Dementia. He served in the US Navy from 1962 to 1966 at the US Shangri La. When he successfully completed his tour of duty, he was employed by the Treasury Department for a few years before joining the DC Fire Department. His career as a fireman spanned 33yrs full of promotions and accolades. He excelled through the ranks in the department as Captain and periodically Acting Fire Chief before retiring. In his spare time, he enjoyed leaving the dock of Fort Washington Marina to sail the Potomac or lift off from Hyde Field Airport in his Comanche aircraft in Clinton,MD. He owned several rental properties throughout the District of Columbia and Southern Maryland. Mr. Lucas was a very kind, wise, inspiring and humble man who will sorely be missed by all. He leaves to cherish his fondest memories one daughter, Allette D. Hannon and Allette's mother, Jerline Hannon, one brother, Clifton C. Lucas Jr., (sister-in-law Patricia) one nephew, Marvin Lucas,three nieces, Sundae Lucas-Sayles (Ernest), Sherri Lucas and Shanelle Lucas-Cash (James), along with a host of relatives and friends. He was preceded in his death by his mother Corrine H. Pollard Lucas and father Clifton C. Lucas. The funeral service will be held on Friday, July 12, 2019 at Frazier Mason Memorial Funeral Home, 1661 Good Hope Road, SE, Washington, D. C. 20020 Viewing: 10am-11am Funeral Service: llam-12-noon Interment tofollow at: Cheltenham Veterans Cemetery, 11301 Crain Highway, Cheltenham, Maryland 20603

The family of Mr Edward Allan Lucas created this Life Tributes page to make it easy to share your memories.

Send flowers to the Lucas family.