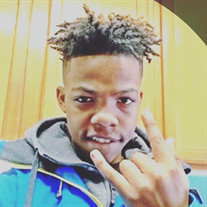 Gerald Rashad Watson was born on January 18, 2003 in Washington, DC to Kimberly Watson and Gregory Holliway. Gerald was educated in both the DC Public Schools and the DC Public Charter School system. He developed childhood friends at Stanton Elementary School, he loved his teachers at Friendships Public Charter School - Chamberlain Campus and developed into his own while at Anacostia Senior High School. Gerald’s first passion was dancing. He was the life of the party. At the age of 10, he competed in a dance competition and blew the crowd away! He won $1,500 because of those dance skills! Gerald also had a love for football. He played for the Woodland Tigers as well as the Ward 8 Buccaneers. His proudest moment in playing football was helping win the championship with the Fort Stanton Generals. Gerald loved to play Madden on the PlayStation. He would always bet people and poked fun at his little brother, Steve that one day he would be as great as him at video games. If anyone was sad, Gerald knew how to lift them up with his jokes and his smile. Most of all, that smile would brighten up your day. It was simply contagious! To mommy, he was Squirrel. To his friends, he was G-Herbo! To his grandma Bert, he was Big Sexy, until he told his grandma not to call him Big Sexy but call him Big Poppa instead. His love for food, fun and family is what brought happiness to him. He especially loved his Great Grandma Dot’s cornbread and often joked that he wanted his wedding cake made from cornbread. Gerald would give anything to you except his cornbread. Gerald will be missed by many who cherished his memory! He is survived by his mother Kimberly Watson, his father Gregory Holliway, and his stepfather Steve Brice; two sisters, Gi’Amari Watson and Ste’Niya Watson; four brothers, Gregory Watson, Steve Watson, Jermaine Rasheed, and Makelle Rasheed; two uncles, Reginald Pearson (Natasha) and Delante Holliway; one aunt, Lakeshia Holliway; two extended aunts, Passion Riddick and Tracy Jenkins; one extended uncle, Xavier Turner; two loving grandmothers, Alberta Pearson and JoAnn Holliway; one extended grandmother, Patricia Smith; his great grandmother, Dorothy Bates Holliway; his Godfather, Darrell Gaston; his godbrother, Ashton Middleton; and best friend JaQuell Jackson. He was met at the heavenly gates by his great grandmother Gladys Pearson-Mitchell and both his grandfathers, William Watson and Gregory Hall. He leaves us to cherish his memory with a host of family, friends, and the entire community at large.

Gerald Rashad Watson was born on January 18, 2003 in Washington, DC to Kimberly Watson and Gregory Holliway. Gerald was educated in both the DC Public Schools and the DC Public Charter School system. He developed childhood friends at Stanton... View Obituary & Service Information

The family of Mr. Gerald Rashad Watson created this Life Tributes page to make it easy to share your memories.

Send flowers to the Watson family.