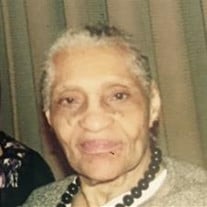 OBITUARY Gladys Nora Derricotte, 94, of Washington, DC peacefully transitioned on March 10, 2017. She was one of three children born to Henry and Lydia (Butler) Wynne. She grew up in Houston, Texas and attended school there. When she moved to Washington, DC in 1947, she attended Blackwell Business School. She initially worked in the Federal Government at the Department of Treasury before landing at the Government Accountability Office where she worked for more than 35 years. Gladys married Randolph Derricotte in 1948; from their union came five children: Randolph and Gladys later divorced in 1974. Gladys was the family matriarch and the standard for decency and decorum. She was a good example of someone who was consistent, reliable and responsible. Gladys had a love for early childhood education, which she studied, and was a natural fit given her kind and gentle spirit and unwavering patience with children. She was always there for her family. She was generous, and when she saw a need she would do what she could to help meet that need. Through her actions her family knew she loved them. Her willingness to make costly sacrifices without asking for anything in return was a blessing to all. Gladys was a staunch Dallas Cowboys fan and an excellent student of the game of football. She was such a die-hard Cowboys fan that by default her children and grand-children became Dallas Cowboys fans or else. Gladys leaves to cherish her memory her children: Oliver Derricotte, Michele Peyton, Denise Derricotte and Wayne Derricotte, five grandchildren: Pamela Scott, O’Neal Spruell, Tisha Adeleke, Tyrene Woodward and Kimberly Campbell-Lewis; eight great grandchildren; thirteen great great-grandchildren; and a host of extended family and friends. Gladys’s son, Stanley Derricotte, her sister Essie-Mae Bobo and her brother Butler Wynne preceded her in death.

OBITUARY Gladys Nora Derricotte, 94, of Washington, DC peacefully transitioned on March 10, 2017. She was one of three children born to Henry and Lydia (Butler) Wynne. She grew up in Houston, Texas and attended school there. When she moved... View Obituary & Service Information

The family of Gladys N Derricotte created this Life Tributes page to make it easy to share your memories.

Send flowers to the Derricotte family.