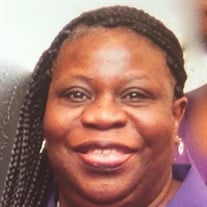 Jacqueline Grimes “Jackie” was born the sixth of seven blessings to the Late Joseph and Lucille Grimes. Jacqueline was welcomed to this world on December 22, 1962 in Washington, DC. For 58 years, she enjoyed life and spending time with her family and friends. Jacqueline departed earthly life and entered the “Master’s Joy” on Sunday, December 27, 2020. Jacqueline’s godmother Estelle made her the namesake of the former First Lady Jaqueline Kennedy Onassis. She was affectionately given the nicknames “Jack Rabbit” and “Jackie” by her father Joe, who was known for providing all of his children, grandchildren and great-grandchildren with nicknames that have followed them throughout their adult life. In her early years, Jacqueline attended Baptist churches with her family, including Sunday School. She was educated in the public-school system of the District of Columbia. For a number of years, she was employed at Marriott Corporation in the hospitality department, and Goodwill Industries as a store clerk. Jacqueline was a devoted daughter, sister, aunt and friend. Although Jackie never had biological children of her own, she cared for, nurtured and assisted in raising each of her nieces, nephews, great-nieces, great nephews and neighborhood children as if they were her own. For years, Jackie had become the live-in nanny to several of her sisters and girlfriends’ children. Whoever or whenever she was needed, she would always lend a helping hand. Jackie was always the life of the party! She loved to dance, play cards and completing crossword puzzles. She was always one to “tell you about yourself” and have some “choice words” for you, even if your feelings were hurt momentarily. Jacqueline was proceeded in death by her parents Joseph Sr. and Lucille Grimes; one sister: Diane Grimes; and two brothers: Joseph Grimes Jr., and Alonzo Grimes; one sister-in-law: Sharon Jackson Grimes; one nephew: LeMichael Horne; godmother: Estelle Chambliss; and cousin-sister: Sharon Grimes. To cherish her loving memories, Jacqueline leaves three sisters: Rev. Lucy G. Horne, Tawana Grimes, and Kim Grimes; eight nieces: Kutrina, LaShanta (Corey), Shavone, Sequia (Troy), Aja, Sharvette, Katricia and Keara; five nephews: Alonzo, Garnett, Aaron, Derrick and Kevin; three godchildren: Jerome Bruton II, Daya Good and Nathaniel Good; five God-sisters: Deborah Corley, Debra Dockery, Willette Braddock, Paulette Thomas and Audrey Chambliss-Gray; one God-brother: Alphonso Hines; and a host of great-nieces, great-nephews, family and friends whom all loved her dearly.

Jacqueline Grimes “Jackie” was born the sixth of seven blessings to the Late Joseph and Lucille Grimes. Jacqueline was welcomed to this world on December 22, 1962 in Washington, DC. For 58 years, she enjoyed life and spending time with her family... View Obituary & Service Information

The family of Jacqueline Grimes created this Life Tributes page to make it easy to share your memories.

Jacqueline Grimes “Jackie” was born the sixth of seven blessings...

Send flowers to the Grimes family.