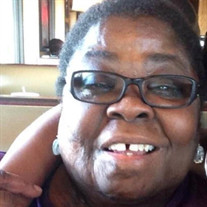 Jacqueline Gerona McNeil (Jackie) was born in Conway, SC on August 20th, 1957. She was the ninth child and only daughter of Mitchell James McNeil and Mazie Dee Jones-McNeil. She transitioned peacefully at the age of 62, in the care of Doctors Community Hospital with her daughter by her side. Jackie graduated from Conway High School, class of 1976. After graduating, she moved to Washington, DC. It was here that she would begin her 40 plus career in the healthcare industry and expand her loving family; first with a son, Antoine, then a daughter, Shiesha. For many years, Jackie worked at Children’s National Medical Center as a Physical Rehabilitation Aide. Working in the healthcare field suited her well because it aligned with her service-oriented heart. Her life was a living example of Ephesians 4:32 — “And be kind and compassionate to one another, forgiving one another, just as God also forgave you in Christ.” Until her health condition made it impossible, Jackie was active in the life of the church, singing in the choir, organizing fish fry dinners, setting-up field trips for church youth, and assisting with the church Girl Scout troop. Jackie had the type of personality that pulled you into her orbit. You could not leave her company without a smile on your face. Those who knew her would describe her as caring, nurturing, and hilarious. She always had a kind word and a smile for those in need. Her creativity took many forms, a sentiment demonstrated by her years spent making jewelry and crafts, then selling her wares at craft shows. One of her favorite ways to express love was through food. If you were lucky, you could set aside a plate of her famous mac & cheese before it all disappeared! Anyone who met her, loved her, and she will be dearly missed. She leaves to cherish her memory her daughter, Shiesha; her brothers, Derry, Henry and Curtis; lifelong friends like Rosalind, Gracie, and Harriet; and her many beloved nieces, nephews, and cousins. Preceding her in death are her son, Antoine; brothers, Willie (Gwen), Mitchell (Helen), Carl (Betty), Herman (Phyllis) and Johnny.

Jacqueline Gerona McNeil (Jackie) was born in Conway, SC on August 20th, 1957. She was the ninth child and only daughter of Mitchell James McNeil and Mazie Dee Jones-McNeil. She transitioned peacefully at the age of 62, in the care of Doctors... View Obituary & Service Information

The family of Ms. Jacqueline McNeil created this Life Tributes page to make it easy to share your memories.

Send flowers to the McNeil family.