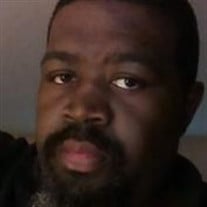 James departed this life peacefully and with honor and grace after brief health complications on Saturday, September 2, 2017 at 2:18 am at United Medical Center in Washington, DC. James was born on May 17, 1971 to James and Gaynell Lewter in Washington, DC. James was the middle child of three and everyone knew he was special from birth. He had a heart that was bigger than we all knew. He loved everyone that he came across. He loved to sing all types of music. Whatever he put his hands on was blessed. James accepted the Lord as his Savior at an early age. He attended New Image Baptist Church in his early years. In later years he and his family joined Open Bible Ministries. James sang in the choir and was a part of the Men's Ministry. He didn't let everyone know that he could sing. Two of his favorite songs that he felt so strong about was "Clean Heart" by Fred Hammond and "That's What Jesus Is To Me" by Sam Kendrick. James was educated int eh DC public school system. He played football at Ballou Senior High School where he was known to be one of DC's #1 prospects. James had various jobs from Sears, Pizza Hut, Rent-A-Center, Prime Time, Orin, the EPA and Rent To Own among others. In every job James gave his best. James leaves to cherish his memories his loving wife of 26 years Debora, two sons James Jr. and Jamar Sr., five grandchildren Eden, Rylin, Logan, Lucas and Jamar Jr., father James Raleigh, two sisters Emily on Vonita, god-sister Coretta, six godchildren Makayla, RaShanna, Don'Yae, Jordyn Amani, Ariah, Azera, Janiyah, Jalesa, Jada and Emmanuel Jr., his favorite cousin Keith, brothers and sisters in law and a host of nieces, nephews other relatives and friends. To greet James in the Kingdom of Heaven is his beloved mother Gaynell Lewter, mother and father in law Frances and Willie Lee and a host of angels.

James departed this life peacefully and with honor and grace after brief health complications on Saturday, September 2, 2017 at 2:18 am at United Medical Center in Washington, DC. James was born on May 17, 1971 to James and Gaynell Lewter... View Obituary & Service Information

The family of Mr. James Eric Lewter Sr. created this Life Tributes page to make it easy to share your memories.

James departed this life peacefully and with honor and grace...

Send flowers to the Lewter family.