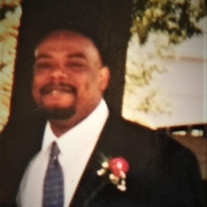 James Leonard Matthews, affectionally known as Boobie, was born on June 22, 1962, to Shirley Inez Matthews and the late William Murphy in Washington, DC where he was raised and resided with his late Grandmother Agnes Matthews, the love of his life. Boobie was educated through the District of Columbia Public School System, later obtaining his GED from the University of the District of Columbia GED Program in the early 80’s, where he scored over the highest percentiles on every part of the GED test. Also, in the 80’s, Boobie attended and completed the Potomac Job Corp Plumbing Apprentice Program, and through his skills, he was employed as a part of the plumbing team contracted to revitalize the Frank D. Reeves Municipal Building located within the 14th and U Street, NW corridor. Boobie was an avid mathematician and loved solving difficult problems as well as tutoring students in math at Kids House. He was accepted into the University of District of the Columbia’s Bachelor of Science Degree Program under the Department of Computer Science and Information Technology in the School of Engineering and Applied Sciences, a program with a heavy emphasis on mathematics and the study of the algorithmic process which would have allowed him to describe and transform information. Boobie was able to complete 2- years of the program, before deciding to join the FAC Heating and Air Conditioning (HVAC) Apprenticeship Program, which allowed him the opportunity to train and work simultaneously. In 1997, James met Yvette Tutt at the So Others Might Eat (SOME) Organization. They started dating, and James began volunteering with Yvette to serve at Kids House, an after-school program at Community Academy Public Charter School (CAPCS), where James began held a few positions. James began attending Zion Baptist Church. James and Yvette were eventually married in October 1999. James decided to move his family to Faith Assembly of Christ (FAC) Church in Capital Heights, MD, under Bishop Mitchell Way in 2000, and there, he was Baptized. James really enjoyed being a member of the FAC Family and held many positions within the Church; Usher Board, Deacon in Training, Men’s Group and Choir. He even formed the 1st Boys Basketball Team, where he coached boy’s ages 9-12. James became employed at FAC as a Maintenance Technician (BMT) in 2005, and as Mother Way use to say, “No one could clean the church and make it smell as fresh as James could”. Boobie really loved his children, grandchildren and bonus children. He enjoyed nothing more than spending time with his family and taking pictures to capture the moments. He absolutely cherished the time he spent with his grandchildren. He enjoyed traveling out of town with them, taking them to school and picking them up, sitting in class with them, going to the park, he even braided their hair. He ensured they attended church and Sunday school, he taught them about the bible, he attended school plays, birthday parties, Easter fun events, dressing them up for Halloween Parades, taking them to dance classes, picking them up from play rehearsals, helping with homework, teaching them to read and tie their shoes, teaching them math and word games, attending graduations, taking them to college and/or camp, dancing and singing with them, or just watching a family movie at home. Nothing brought him more joy then spending family time, and he will forever be missed by them all. Boobie is survived by his mother Shirley Koonce, brother Anthony Koonce, daughters Ronnetta Lashaun and Ebony Starr Matthews, bonus children Tanya Smith, Shaunette Tutt and Keith Proctor, Jr.; seven grandchildren; Da’Quan, Da’Shawn, Kyree, Diamond, Kennethia, David, Zoey Matthews; four bonus grandkids, Shaquan, Brittany, Andre and Mikayla; three great-grandchildren; Da’Kari, I’saiah, and Ashton, bonus grandchildren; Pe’tyn, Brooke and Tyler. Niece Antane and nephews Anthony, Antonio and Shard, grea-tnieces and nephews Amoure, Nolan, Anthony, Jr., Amaan and Amare. Aunts; Jean, Joan, Audrey, Carolyn and Uncle John. Special friend Yvette Matthews, and a host of other relatives and friends.

James Leonard Matthews, affectionally known as Boobie, was born on June 22, 1962, to Shirley Inez Matthews and the late William Murphy in Washington, DC where he was raised and resided with his late Grandmother Agnes Matthews, the love of... View Obituary & Service Information

The family of James Leonard Matthews created this Life Tributes page to make it easy to share your memories.

Send flowers to the Matthews family.