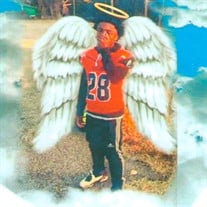 James Anthony Smith (Jamie/Lil' James) was born on August 3, 2000 to Benita Smith and James Thorpe, and godparents, James and Elizabeth Aukard. Lil' James attended Kimble Elementary School in Southeast, Washington DC. Ms. Tappscott was James' school teacher and she became a part of his life, keeping him on the right path while attending Kimble Elementary School. Arter graduating from Kimble Elementary, James moved with his godmother, Elizabeth Aukard, who loved him so much. She and James moved to Greenville, South Carolina, where he attended Greenville Senior High School. James started playing football and became the running back for the Carolina Trojans Football Team,. which was his school's team. Outside of football, James enjoyed ice skating, basketball, video games, and hanging with his friends (including his best friend, Akiel Wallace). James especially enjoyed hanging with his big brother, Michael Smith. Mikie and James became closer once James returned to the DC area and Mikie really loved his little brother James. James was a kind-hearted child that would do anything for anyone. He was the kind of gentleman that would open the door for ladies. He had a dog named Hunter that he loved. James Anthony Smith is preceded in death by his brother, James Crook Perry. He leaves in mourning his mother, Benita Smith and father, James Thorpe; godparents, James and Elizabeth Aukard; older brother, Michael; sister, Jordan Thorpe; a host of nieces and nephews, Messitiee, Metio, Memphis, Phoenix, Kevin, Erick, Eyanna, and Erin; aunts, Sharron, Patrice, Cynthia, and Ida; uncles, Anthony, Erick, Darrell, Lewis, Michael, Bennie, and Eric; and many other relatives and friends.

The family of James Anthony Smith created this Life Tributes page to make it easy to share your memories.

Send flowers to the Smith family.