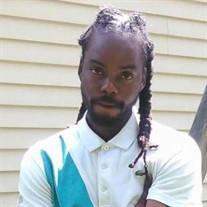 Jerry Gene Jackson was the first born of identical twins on April 10th,1980 in Washington, D.C. to Jerry Wilson and the late great Terry Jackson. Jerry departed this life and crossed over to eternity on March 19th 2022. Jerry was educated in the MD Prince George’s County Public School system where he received his HS diploma at Northwestern High School. After graduating high school, Jerry was intrigued with entrepreneurialism by helping the family grow our janitorial business. He was very skilled with his hands whether it be working on houses or on cars. After helping the family with our business, he went on to start Twinz Detailing with his twin brother and a home improvement business. At an early age, in 1996 Jerry confessed Jesus Christ as HIS personal Lord and Savior and was baptized at Walker Mill Baptist Church. Jerry enjoyed learning about the Lord Jesus Christ in Sunday School and was eager to ask questions. He enjoyed fishing with his father and twin brother, he had a love for dogs, and he was always there in a blink of an eye when you needed help. His pride & his joy was his hair & his family; he encouraged all his family members to loc their hair. He attended almost every family gathering – you can count on Jerry Gene being there. Jerry was the life of the party, he loved dancing, and taking pictures to keep long-lasting memories. Jerry lived his life to the fullest and made an impact on every life he touched. He was thoughtful, caring, funny, considerate, and at times, a little bit crazy. His warm smile brightened every person’s spirit when they saw it along with his unconditional love that he extended to any person who needed it. He was an avid fan of the Washington Redskins, and other Washington, DC sports teams. Jerry was preceded in death by his mother Terry Jackson, sister Charmane Jackson, and brother Milton Wilson. In memory of his life, Jerry will remain treasured by his only daughter, Destiny Jackson; father, Jerry Wilson; twin brother Jermaine Jackson; brothers James Kelly Antonio Wilson, Brandon Wilson. Sisters, Alecia Kelly, Latonia Wilson, Sherry Wilson, Cherri Wilson,God-mother,Renee Slaughter and a host of nieces, nephews, aunts, uncles, and cousins.

Jerry Gene Jackson was the first born of identical twins on April 10th,1980 in Washington, D.C. to Jerry Wilson and the late great Terry Jackson. Jerry departed this life and crossed over to eternity on March 19th 2022. Jerry was educated... View Obituary & Service Information

The family of JERRY G JACKSON created this Life Tributes page to make it easy to share your memories.

Jerry Gene Jackson was the first born of identical twins on April...

Send flowers to the JACKSON family.