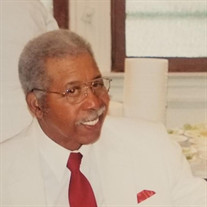 JIMMIE RAFFORD HAMILTON (US Army Veteran) On August 24th, 1931, George and Curry Hamilton had a son named Jimmy Rafford Hamilton in Edgefield, South Carolina. On June 7, 2020, God called Jimmie home to rest. On December 3rd, 1957, Jimmy married to Viola Elizabeth Curry. He was blessed with three children, two sons, Eric, Fraid, and one daughter Shirley. Jimmy enlisted into the Army Armed Forces. Being in the armed forces, Jimmy was described as a disciplinarian. He enjoyed giving orders, and later received The National Defense Service Medal, The Korean Service Medal, and the Bronze Service Star. On January 21, 1953, after serving in the Korean War, he received an Honorable Discharge. Jimmy had a great work ethic and was employed by The Marriott Corporation. After being employed by the Marriott Corporation for half of a century, he finally retired with a long successful career. Jimmie was also a contractor for UPO (United Personnel Office). Jimmy worked hand and hand with the Marion Barry Administration and many other businesses in Ward 8. Jimmy was the happiest when he was outside. He felt the most joy when he was fishing and hunting with his buddies, and at times he loved to take his hunting dogs out. When he caught the biggest fish, he enjoyed bragging rights. He loved to reminisce and have a good laugh with his buddies. In 1984 he began his journey of service in ministry. By working in the Culinary Services, the male chorus, and was even chosen as a Trustee and Deacon of the Delaware Baptist Church. Jimmy leaves to cherish his memory two sons and one daughter, Eric and Michele Hamilton daughter in law, Farid Hakim, Minister Shirley and William Plummer son in-law. His sibling Luther Hamilton as well as additional cherished family members Denise & Bryant and Eugene Banks. Lastly, 13 grandchildren, 20 great-grandchildren, and friends. In the words of Jimmie, "I will always be in Ward 8, I will always do for Ward 8. The family would like to thank everyone for their prayers and condolences.

The family of Mr. Jimmie Rafford Hamilton created this Life Tributes page to make it easy to share your memories.

Send flowers to the Hamilton family.