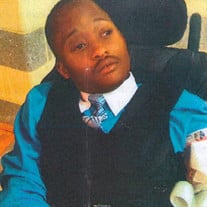 Kendall O'Neal Thompson was granted his angel wings on September 13, 2017 following a lifelong illness. His final days were spent surrounded by family and friends that Kendall has touched in some small way throughout his short yet very memorable life. Kendall's life would seem too short to many, but those who were touched by him understood that the quality of existence far exceeds the quantity of time in which one lives. His gentle smile could melt the hearts of those around him and even though he could not speak many words his voice and thoughts could be heard. Kendall s early learning began at Genesis Early Learning Development Center. At the age of 18 months he stared attending Prince George's County Public Schools which included James Ryder Randall Elementary School, Panorama Elementary School, Oxon Hill Middle School and Oxon Hill Senior High School. Kendall was in the 11th grade at the time of his passing. Kendall would attend church on different occasions. Kendall loved to eat but the food had to be good! He also liked sitting at the front door watching the deer grazing and the squirrels running up and down the tree and jumping from limb to limb. At times Kendall would test faith to see if someone left the screen door unlocked by mistake, ready to make his escape. He loved being around other children. His lifelong toy was his car steering wheel. Kendall was not a selfish kid but if you touched that wheel you would definitely be in for a rude awakening. Kendall's passing reminds other that his life is one to be celebrated. Although we will miss him everyday he will forever remain in our hearts. Through his teachings about life, we were able to create wonderful memories and it has been a privilege to be a part of his life. Kendall is survived by his loving parents Fonda Bass and Marcus Thompson; sister Hannah Grant-Smith; brothers Kevin Bass and Keith Thomas; one brother-in-law Kirby Grant; six nieces Kevina Nicholson(John), Keveona Smith, Kamiya Grant, Amira Vailes, Sakeithia Rhea and Kylie Thomas; three nephews Leon Barnett, Keith THomas and Felicia Barnes(Ernest), Frances Bass,Jr., Frederick Bass, Farley Bass(Charissa), Cornell Ford(Karen), Alonzo Thompson and Eric Thompson; Kendall leaves behind many wonderful caregivers that provided love and support that enhanced his quality of life. Kendall's love extends to his wonderful nurses Nancy Lancaster, Edwina Hill, Nancy Holland and Vernae' Armstead who Kendall also thought or felt she was his "girlfriend" and a host of cousins, great-aunts, great-uncles, other relatives and friends.

Kendall O'Neal Thompson was granted his angel wings on September 13, 2017 following a lifelong illness. His final days were spent surrounded by family and friends that Kendall has touched in some small way throughout his short yet very memorable... View Obituary & Service Information

The family of Mr. Kendall O'Neal Thompson created this Life Tributes page to make it easy to share your memories.

Kendall O&#39;Neal Thompson was granted his angel wings on September...

Send flowers to the Thompson family.