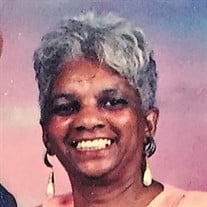 Sunrise: December 10th, 1941 Sunset: December 27th, 2018 On Thursday, December 27, 2018, Loretta Deloris Simmons was called home to be with the Lord. Loretta was born on December 10, 1941 in Harrells, North Carolina to the late Reverend George F. Henry and Mary Lou Henry. She was the second of three daughters and the fourth child of the nine children born from their union. Loretta was educated in both the Sampson County, North Carolina, and the District of Columbia public school systems. In 1956, Loretta moved with her family to Washington, D.C. Having accepted Christ at an early age, she subsequently became a founding member of the New Birth Baptist Church. In later years, she joined the Gideon Baptist Church. She met the love of her life, the late Emmett Russell Simmons, in Washington, D.C. and they were joined in Holy Matrimony. For many years they resided in their Washington, D.C. homes first located on Adams Street, N.W, and later on Ingraham Street, N.W. Together they raised two children, Helena and William. Loretta was a faithful employee and worked for various companies for many years until she retired. She was a staunch supporter of her husband’s musical career and transportation business. Loretta was preceded in death by her parents and four of her brothers, Harry A.; Johnnie F.; Sidney M.; and Stanley F. Loretta leaves to mourn her departure, two children: Helena M. Lisane and William H. Simmons (Stephanie); four grandchildren: Glendelle S. Lisane, Courtney M. Lisane, Lydia J. Simmons and Kevin A. Yuille; two great grandchildren: Tristan J. Sterling and KaMaya J. Lowry; two brothers: Bobby G. Henry, Sr. and Ronald F. Henry; two sisters: Artis J. Whitley and Vivian E. Harvey, three sister in-laws: Polly A. Henry, Clara Henry and Angela Henry; one brother in-law Ronald Harvey and a host of nieces, nephews, and other family and friends. We will forever give thanks to our Heavenly Father for the time shared with such a special person so willing to give of herself to help others with that warm and kind smile that only Loretta could give. We will miss you, dearly.

The family of Loretta Simmons created this Life Tributes page to make it easy to share your memories.

Send flowers to the Simmons family.