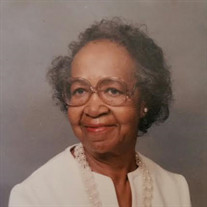 Louise Anna (Lewis) Hopkins was born on January 28, 1922 in Xenia, Ohio. She was affectionately known as “Lutch” to her family. She was the third of five children born to Floyd William Lewis and Rae Duncan Lewis. She started at an early age to join First A.M.E. Church under the pastorage of Rev. Harrison J. Bryant of Xenia. She enjoyed helping with the youth department and singing with the Senior Choir. Louise graduated from East High School with honors (member of the National Honor Society) in May 1939, and the valedictorian the commencement, the beginning of her educational goal. She completed a two-year study of Religious Principles at Wilberforce University and follow courses through Pine Forge in Pennsylvania (total of four years). She was the only Negro (Black) traveling with white students to Washington in 1944 to meet the QUOTA of Ohio State employees in the Nation’s Capital. She enrolled in the Department of Agriculture, Graduate School, where she obtained a four-year Certificate in Editorial and Technical Writing. She had an extensive work history with various government agencies, a Stenographic Unit Supervisor at the Department of the Navy, Secretary for the Department of Commerce, and writer-editor with the U.S. Department of Agriculture. She retired after 38 years of service, and the celebration was held at the National Press Club in 1982. Louise was united in marriage on January 1946 to Sgt. Jacob Hopkins, Jr. Through this union, a daughter, Marjean Rae was born. Louise was an active member of several organizations including Business and Professional Women; Northeast AARP Chapter; Faith Presbyterian Sunday early worship service; Sigma gamma Rho Sorority (honor), Prince Hall Order of Eastern Star (Worthy Matron of Datcher Chapter No.7, 1963). She was a faith member of Allen Chapel A.M.E. When she moved to the Southeast area, located near Allen Chapel, she joined the Junior-Senior Bible Study group, Choir No.1 and Silent Workers group in 1984. The celestial reunion of the predeceased family, the parents Rae and Floyd William Lewis, Sr.; two sisters (Charity Elizabeth and Marjorie Juanita Bullard; a brother Floyd Lewis, Jr., son-in-law Harold Martin infant grandson Gerald Winfred, infant granddaughter Aaliyah. She leaves to cherish in her memory, a loving daughter, Marjean Martin (and best friend); four grandsons, Harold, Nakia, Jacob and Omar. She had 17 greatgrand's to numerous to name here. A Sister, Mary Wallace and son, Myron Wallace in Ohio, several cousins and special friends.

Louise Anna (Lewis) Hopkins was born on January 28, 1922 in Xenia, Ohio. She was affectionately known as &#8220;Lutch&#8221; to her family. She was the third of five children born to Floyd William Lewis and Rae Duncan Lewis. She started at an... View Obituary & Service Information

The family of Louise Hopkins created this Life Tributes page to make it easy to share your memories.

Send flowers to the Hopkins family.