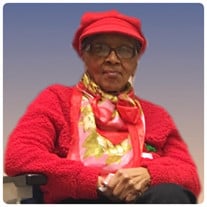 On August 21, 1927 Lula Mae Reeves was born to the late George and Lora Williams in Erwin, North Carolina. At the early age of two, Lula and her family relocated to Washington, DC. She was the oldest of nine children. Lula attended District of Columbia Public Schools and worked as a cook at New Redeemed Child Development Center, which was owned by her brother. Lula married the late Charles W. Reeves Sr., who was a World War II Veteran and together they raised seven children. She was preceded in death by her parents, grandparents, seven siblings George S. Williams, Howard L. Williams Sr., John W. Williams, Helen C. Scott, Thelma W. Sams, Bernard Williams, Ruby J. Ross, and her two daughters Jacqueline Hunter and Shelia L. Reeves. Cooking was her specialty and after 26 years of preparing meals and serving others Lula retired. Love was the main ingredient in all her recipes especially her famous potato salad, mouthwatering sweet potato pie, and delicious apple pie. Lula had many other pastimes that she enjoyed such as listening to music, dancing and watching wrestling. She was very passionate about music and her love for Chuck Rider, Bobby “Blue” Bland, Ray Charles, Aretha Franklin and Mahalia Jackson. Her spark could brighten up any room. You could always find her dancing her infamous Lula two step “dance” we all grew to know and love. She was an avid wrestling fan for 30+ years. She spent every Monday night watching WWE and Tuesday nights watching WWF. She had many favorite wrestlers throughout the years such as Rick Flare, Jake the Snake, and The Rock. Most recently she declared Roman Reigns “The Empire” as her favorite wrestler. Lula was full of joy and full of life. Her exuberance was contagious. Not only was she enjoyable to be around she was the rock of the family. The one we depended on, the one we leaned on, the shoulders we cried on, the ears that listened, the problem solver, the beacon of hope to our family. She was selfless, she was kind, she was forgiving, and she loved unconditionally. Lula was our “Hero”. Lula continued to live her life in great spirits until she took her last breath on December 31, 2019. Her legacy will be cherished and carried on by her brother; Lynn Williams, sister in law; Laverne Williams. Children; Cornell M. Williams Sr. (Laverne Williams), Charles W. Reeves Jr, Patrick Reeves, and Lorraine V. Reeves; twelve grandchildren; fifteen great-grandchildren; four great great-grandchildren; and a host of family and friends.

On August 21, 1927 Lula Mae Reeves was born to the late George and Lora Williams in Erwin, North Carolina. At the early age of two, Lula and her family relocated to Washington, DC. She was the oldest of nine children. Lula attended District... View Obituary & Service Information

The family of Ms. Lula Mae Reeves created this Life Tributes page to make it easy to share your memories.

Send flowers to the Reeves family.