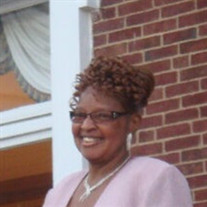 In Memory of the Life of Marion D. Brown Marion Delores Brown, a daughter given by the Lord to the late Eddie Hood Sanders Sr., and Mary Cornelia Sanders, was born in Washington, DC on February 5, 1944, entered eternal peace on Monday, December 17, 2018 following a period of declining health. Today we rejoice in the knowledge that she has passed the barrier of time as we know it and is forever at home with the Savior she faithfully served for many years. Marion, affectionately known as “Granny” or “Pig” was educated in the District of Columbia Public Schools, graduating from Dunbar High School. After graduation, Marion perused a career as an Accountant, ultimately retiring from the Washington Hospital Center after thirty-five years of service. After the passing of her mother, Marion quickly became the Matriarch of the family, hosting family dinners, holiday celebrations, and other traditional gatherings to ensure that the family remained close. As the eldest girl, Marion thoroughly enjoyed spending quality time with her siblings, William, Robert, Bernard, Eddie Jr., Charles, Kathleen, and Mary Ann. Her siblings, children, grandchildren, and nieces and nephews were her world. She was extremely proud and supportive of her family and often doted on their accomplishments. A loving grandmother, she made sure she attended every birthday party, every one of her granddaughter’s soccer games, every football game that she was able to attend to see her grandson (Kamari) quarterback, graduation, and wedding. She was also the family’s peacemaker. Some of her fondest times were spent traveling with friends and family. She dedicated her life to her family, including her children, grandchildren, nieces, and nephews. She had many interests and hobbies, including skating at the National Arena on Kalorama Road. Every summer, Marion and her siblings sponsored trips to Myrtle Beach with their children and grandchildren, stopping along the way to purchase fireworks and other trinkets for her best noted grand Fourth of July celebration. Where you could find Uncle Butch on the grill, DJ Skeeter spinning his records, and Bob and all of her nephews lighting up the sky with fireworks. After retiring, Marion spent most of her day conversing with her remaining siblings, grandchildren, and friends. Traveling with family, watching soap operas, sitting on the porch soaking in all the gossip and drama that went on in the Park View community (she knew it all). Marion was everyone’s “Granny”. Whenever a family member needed guidance or just a shoulder to lean on or an ear to listen, she was always available. She always had cheerful words, great guidance, and love for her beloved Washington Redskins. Marion leaves to cherish her memory, her two sons Ralph Coates (Skeeter) and Robert Brown (Bob), one loving daughter-in-law Charrissa Brown, one sister and best friend, Mary Ann, seven grandchildren, L’Tosha, (Ali), Brittany, Bianca, Teon, Kaniyah, Neimah, and Kamari; four great grandchildren, Nasir, Nevaeh, Charli, and Ari; loving nieces, nephews, and a host of other relatives and friends, and her beloved cat, Curly. In addition to her father and mother, she was pre-deceased by her brothers: William, Robert, Bernard Sr., Eddie Jr., Charles, and sister Kathleen.

In Memory of the Life of Marion D. Brown Marion Delores Brown, a daughter given by the Lord to the late Eddie Hood Sanders Sr., and Mary Cornelia Sanders, was born in Washington, DC on February 5, 1944, entered eternal peace on Monday, December... View Obituary & Service Information

The family of Ms. Marion Delores Brown created this Life Tributes page to make it easy to share your memories.

In Memory of the Life of Marion D. Brown
Marion Delores Brown,...