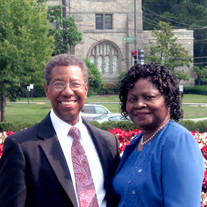 MAURICE RANDOLPH THOMAS “AN UNMATCHED MAN!” Maurice Randolph Thomas, 67, of Ft Washington, MD, passed on April 20, 2016, at INOVA Fairfax Hospital after suffering a traumatic brain injury. Maurice was born on May 5, 1948 in Washington, DC to Doris and Morrie Thomas. He had five siblings: Melvin Thomas (deceased); Rosa Handy-Clary; Maria Hemphill (Warren); and Donna Mann. Maurice attended Washington, DC public schools. Through the years, he enjoyed abundant love and support from friends, especially his childhood friend, Everett Washington. On August 28, 1971, at St Francis Xavier Church in Washington, DC, Maurice married Jane Taylor. To this union was born Anthony Maurice Thomas in March 1977. Maurice holds degrees from Southeastern University and Central Michigan University. He did post graduate work at the National Defense University and the American University. Maurice worked for IBM, the Department of Defense, and the Department of the Army in various capacities for over 40 years. He was a recognized leader in the field of information technology and child care and garnered numerous awards for his outstanding work. He and his wife, Jane, raised their family and entertained family and friends in their Ft. Washington, MD home for over 40 years. He enjoyed his grandchildren, first and foremost! He shared his love of classical and jazz music with his best friend and wife, Jane. He was also a huge fan of Sade, Janet Jackson, and Kool and the Gang. Another one of his favorite past times was reading his Bible, and various history books. He absolutely enjoyed beating everyone in Scrabble, loved his family, and would do anything for anyone. He always saw the positive in everything and everyone. For his family and friends, he was, “Mr. Fix It” when it came to computers… Got a problem, call Maurice! And, everyone knew that when Maurice’s Afro and smile showed up, the problem was solved. Maurice was a devout Catholic with a charitable heart and a strong sense of justice. Over the years, he gave generously to organizations such as the Southern Law Poverty Center; NAACP; Feed the Hungry; and the Smithsonian Museum, especially the Smithsonian’s National Museum of African American History and Culture. He also regularly volunteered at a homeless shelter in Alexandria, VA. Despite his various awards as a result of enjoying a stellar career, Maurice considered his greatest achievement to be his family and the love they shared. Maurice is survived by his wife of 44+ years, Jane, his two sons, James Christopher Thomas, and Anthony Maurice Thomas (Melanie); eight (8) grandchildren; one great grandchild; his mother, Doris A.M. Thomas; four siblings: Rosa (Ayo) Handy-Clary; Maria Hemphill (Warren); and Donna Mann; and a host of nephews, nieces, and cousins. Maurice was predeceased by his father, Morrie Thomas; his brother, Melvin Thomas; and his nephew, Rashid Handy. Services for Maurice will be held on Friday, April 29, 2016, at St Columba Catholic Church, 7804 Livingston Rd, Oxon Hill, MD. Viewing will commence at 10:00 a.m., and the funeral mass will start promptly at 11:00 a.m. Father Timothy Baer will officiate.

The family of Maurice Randolph Thomas created this Life Tributes page to make it easy to share your memories.

Send flowers to the Thomas family.