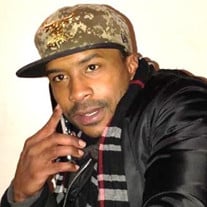 Michael Henson Jackson was born on April 29, 1988. Michael was born to Tara Monique Jackson (Toody), and Darrell Anthony Riggs. Michael who was affectionately known as MJ by his friends was educated in the DC Public School system, and attended... View Obituary & Service Information

The family of Michael Henson Jackson created this Life Tributes page to make it easy to share your memories.

Send flowers to the Jackson family.