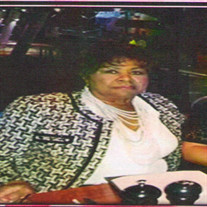 Mildred Lillian Durham Stevens was the oldest of ten children born to the late Margaret M. Durham DeNeal and the late William Davis on September 1, 1943. Mildred was preceded in death by two aunts, Bernice Durham and Lillian Sinclair, one uncle, Jack Grayson, two brothers, Harry and Thomas C. Durham, Sr. and one sister Rose Lee Jordan. Mildred affectionately known as Millie was educated in the D.C. Public School System, where she later worked at several elementary and junior high schools. Millie enjoyed working with her students and would reminisce about the good times she had with the students and staff. She was well loved and admired by many students, teachers and administrations. Millie held many positions, but worked, but worked many jobs servicing the elderly which she enjoyed taking care of the elderly and cooking for them. She enjoyed many activities such as dancing, cooking, sewing, bowling, watching her favorite team the Redskins, talking smack while playing cards with her family. Millie enjoyed going out on their girl's day out with "The Three Amigos" better known as Millie, Jeannette and Jennifer on their monthly outings of two movies, lunch and out shopping. We would ride through the Walmart in the electric carts, enjoying taking their time and shopping, coming back with a car full of groceries. During family functions she was sure to give advice and share some memories with thier nephew, nieces, cousins or just family and friends. Millie was blessed with a beautiful daughter, Deborah and in March of 1970, she married Ottie Stevens. Mildred was a member of many organizations and clubs, one being the Stonewall Athletic Club where she holds the distinction as being the first woman to hold office in their organization. Millie was very active in a lot of clubs and honored and recognized by all. Mildred joined the Catholic faith at a very young age and later joined St. Theresa of Avila. Mildred later joined Imani Temple on Maryland Avenue, N.E. in Washington, D.C. under the leadership of Bishop Augustus Stallings. Mildred enjoyed the teachings and admired Bishop Stallings. Mildred loved to cook and bring Bishop Stallings and his mother, Mother Stallings as she was affectionately known by Millie, many delicious dishes that she would make and bring to them at church. Millie was very active and a faithful and dedicated member until she became ill and could not attend on a regular basis. Mildred leaves to cherish her memories, one daughter, Deborah, one son in law, James, two grandchildren, Mark and Diamond, three great grandchildren, Montrell, Kimora and Brooklyn, five sisters, Jeannette (Thomas), Sandra, Towanda (Hamilton), Jannie, Pamela (Harold), one brother, Jerry, two sisters in law, Jennifer and Sandy Durham. Millie loved and adored all of her family but she had three that were more or less like her own children, Thomas, Jr., Clarence and Carrie and a host of other nephews, nieces, cousins and other relatives. Mildred had so many friends too many to name, but we must acknowledge Elenora Jenkins, Alice Spencer, Mildred Taylor, Betty Paisley, and all of the Divas in the church.

The family of Mildred Stevens created this Life Tributes page to make it easy to share your memories.

Mildred Lillian Durham Stevens was the oldest of ten children...

Send flowers to the Stevens family.