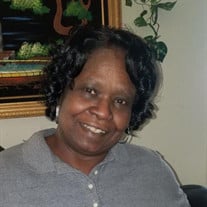 Sandra Paletia Bennett transitioned into the heavenly realm at her home on October 9, 2020, after an arduous battle with heart and kidney disease. She was born Sandra Paletia Guest on November 15, 1961 in Washington, DC to the late Arthur Lee “Shorty” Guest Sr and Carrie Lee Tribble-Guest. Sandra was the youngest of Carrie’s seven kids, and of the four fathered by Arthur Sr. While still in high school, Sandra married Walter “Buster” Bennett and adopted his surname. She graduated from Cardozo Senior High School in 1979 and soon entered the hospitality industry. Sandra thrived when helping others; she provided 35 years of housekeeping service at the Sheraton and Marriott Wardman Park hotels. With a heart of gold, a quick wit, and an infectious smile, Sandra instantly captured the hearts of family and friends. Sandra’s green thumb often saw her homes filled with various plant species from Chinese evergreens to a lemon tree she started from a germinated seed. In her spare time, Sandra could be found chatting with friends, playing Spades, or listening to her favorite artists, Maze featuring Frankie Beverly and, reggae singer, Maxi Priest. Though she was not a church member, Sandra maintained her Christianity. In October 1994, at 26 ½ weeks gestation, Sandra prematurely gave birth to her only surviving child, her beloved daughter, Keosha Quigley, whom is fathered by Earl Quigley Jr. Sandra was a single parent who worked relentlessly to see Keosha through college. In Sandra’s later years, Keosha assumed a caregiver role to assist her mom. Keosha and Sandra’s bond transcended that of the average mother-daughter relationship, and it will continue for the rest of eternity. Sandra will be fondly remembered as Keosha’s “Little Munchkin Princess”. Sandra is survived by her daughter, Keosha, and her sister, Denise Guest. She is further survived by aunts, uncles, nieces, nephews, cousins, and friends. In addition to her parents, Sandra was preceded in death by her siblings, Ceasar Curtis “Cecil” Guest, Arthur Lee “Jig” Guest Jr., Minnie Guest Booker of Syracuse, NY, David Lee Guest, and Robert Lewis Tribble of Laurens, South Carolina.

Sandra Paletia Bennett transitioned into the heavenly realm at her home on October 9, 2020, after an arduous battle with heart and kidney disease. She was born Sandra Paletia Guest on November 15, 1961 in Washington, DC to the late Arthur Lee... View Obituary & Service Information

The family of Ms. Sandra Paletia Bennett created this Life Tributes page to make it easy to share your memories.

Sandra Paletia Bennett transitioned into the heavenly realm at...

Send flowers to the Bennett family.