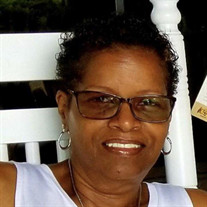 Shirley Ann Goodall was born on April 16, 1951 in Washington, DC to the late John Lee and Gertrude Lee. On Sunday, March 8, 2020, she succumbed to a lengthy illness peacefully at home with her family by her side. Shirley was educated in the Washington, DC Public School System, attending Parkview Elementary School, Burdick Vocational School, and Cardoza High School. She entered the workforce starting her career in the Federal Government as a housekeeper at the U.S. Soldiers Airmen’s Home. Advancing her career, she was a budget analyst at the U.S. Department of Veterans Affairs, where she retired after 45 years of Federal service. Shirley comes from a loving and spiritual family. She spent her early years in Evington, VA, where her parents were from. She loved going there spending summers with her family, attending church at Chapel Grove Baptist Church, and even attending elementary school for one year. Shirley had a special connection with her aunts, uncles, and cousins whom she loved dearly. In the month of August, Shirley and her family traveled to “Lynchburg” as they called it, to attend Homecoming service at Chapel Grove. She looked forward to this trip, because she was able to see her family, friends, and to get a slice of Aunt Bunchie’s famous homemade pound cake. In Washington, DC, on the playground at Parkview Elementary, she met her soulmate – Ervin Eugene Goodall. As an only child, through their relationship, she gained five sisters (Lois, Yvonne, Barbara Ann, Denise and Renee) and four brothers (Joseph, Charles, Ronnie and Melvin) who loved her as their sister. On March 7, 1970, Shirley married her love – Ervin. This year they celebrated 50 years of marriage. From this union they had four children. Together, they enjoyed traveling (mainly to Jamaica), taking short rides through the city, listening to all types of music, entertaining others, hand dancing, especially to oldies but goodies, and listening to her favorite go-go artist Chuck Brown. Shirley loved to share stories about going to see her favorite group the Temptations at the Howard Theatre. You could always find her doing one of her favorite activities: sitting on her porch with her puppy Layla, swinging on her glider, listening to wind chimes or talking to her neighbors. Shirley was an amazing woman, awesome wife, wonderful mother, faithful sister, treasured grandmother, and a great friend. Her joy and love will surely be missed but remain forever a part of those who cherish her memory. Shirley is survived by her loving husband, Ervin Eugene Goodall; three daughters: Torcelia “Tercy” Shanee Hawes (Derrick), Shante La Juan Jones (Sean), Velvet Shaneice Snow (Sean), and a son, Ja’Mar Daluntus Goodall. She has two step-children: Ervin Sterling and LaVita Sterling; ten grandchildren: TaNika Dyson (Keith), Sean Goodall, Antonio Jones, Shakell Goodall, Tyreek Jones, Kiya Snow, Kendric Goodall, Kenneth Goodall, and Ta’Vaz Goodall; six great-grandchildren: Cameron Dukes, Baron Dyson, Kennedy Dyson, A’Miya Jones, Amari Jones, and Aryn Jones; and a host of other relatives and dear friends. Preceding Shirley in death are her parents; John and Gertrude Lee, two grandsons: Brian Jones and Brian Trevon Davis; and one granddaughter, Diamond Jones. Shirley was a loyal friend and a great confidant who formed lasting relationships. Her childhood friend, Millie Finnie, whom she met in third grade; Cyrone Smith from her early years in Edgewood Terrace; her neighbors Ma Brooks, Pat, Helen, Glenda, and Marilyne; two sister-in-law’s Diane and Treavous; three brother-in-law’s Donald, Raywood and Michael; and her “adopted” children Doniece, Kenza, Johnny, Octavia, Chuck and all of her nieces and nephews whom she absolutely adored. Shirley has been a blessing to many. She will sorely be missed.

Shirley Ann Goodall was born on April 16, 1951 in Washington, DC to the late John Lee and Gertrude Lee. On Sunday, March 8, 2020, she succumbed to a lengthy illness peacefully at home with her family by her side. Shirley was educated in the... View Obituary & Service Information

The family of Mrs. Shirley Ann Goodall created this Life Tributes page to make it easy to share your memories.

Send flowers to the Goodall family.