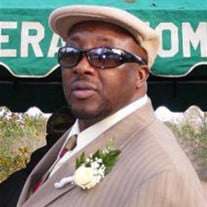 Theodore Daniel was born July 26, 1948 in Nash-Edgecombe County to the late Melbert “Booger” and Susie Mae “Mutt” Daniels (Bryant). While battling a congestive heart failure caused by a heart disease called Amyloidosis, he departed his earthly life on April 29, 2019 7:41 am, at the Bridgepoint Hospital facility in South West, Washington, D.C. While attending Zion Cross Baptist Church in Whitakers North Carolina, at an early age, Theodore accepted the Lord Jesus as his personal Savior. He had a personality that made people of his community feel loved and welcomed. He encouraged others to be wise and to know that it was not his plan to skip a beat of their life, meaning he was very attentive to others. He lived by example and liked to get to the bottom-line quickly. When his children prepared to leave home, he graphed in their memories to not accept anything handed to them, to not accept “any wooden nickels” he would say. Another phrase he relished, the “bottom line” and “bingo”. Theodore loved the Lord and appreciated every breath of life. Theodore attended Edgecombe County Public Schools on rainy days and worked on the family’s farm in North Carolina. Working at Merita bread, a local bakery, he expressed a love for cooking that he progressed to hours watching his mother prepare pleasant meals in the kitchen. Theodore hard work and passion later fueled his career and hobbies in public landscaping, gardening and cooking for family and friends. Theodore’s love for nature and working with his hands continued to flourish. In 1970, Theodore moved to Washington D.C. and later began working (in landscape) at the Arlington National Cemetery in Arlington V.A. In 1988, Theodore left Arlington Cemetery and began working with the Department of Interior, National Park Service where he finished his career. Since early age, Theodore had carried out God’s first directives to Man, “Then the LORD God took the man and placed him in the Garden of Eden to cultivate and keep it”. Genesis 2-15 In 1973, Theodore reconnected with a childhood friend from North Carolina, Vernesta Campbell and after a few years of dating, married her on September 27, 1977. This union produced three beautiful daughters; Shiela, Shileeta, and Dana. Other daughter, LaNilta (Danielle) and sons; Curtis Childs and stepson Reginald Ransdell, fulfilling God’s directive to be fruitful, multiply, and to replenish the earth and subdue it. Genesis 1-28. After retirement from the Park Services, Theodore continued to live his best life doing the things he loved; spending time with his family, tending to his sanctuary e.g. his trees, garden and flower beds. He enjoyed fishing and having family functions with friends and love ones – this is mainly where he got to show off his amazing outdoor cooking talents. He leaves to cherish his memories, his wife Vernesta and children; Curtis, Reginald, Shiela, (Brooks Son in Law), Danielle, Shileeta and Dana. Twelve grandchildren and one great grandchild. Also, he is survived by his brothers and sisters: Melbert Jr (Billy); Herbert (Beaver); Clarence (Rusty); Waverly; Patricia (Tricia); Clinton (CD); Evelyn; Cathina, one deceased sibling, Melvine (Mickey), and a host of in-laws, aunts, uncles, nieces, nephews, cousins and friends.

The family of Mr. Theodore Daniel created this Life Tributes page to make it easy to share your memories.

Send flowers to the Daniel family.