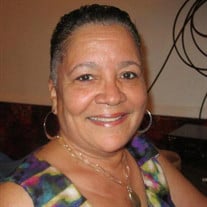 Willa (“Billie”) Brown was born on November 25, 1949 in Washington, D.C., to the late Charles Bowman, Sr. and Teresa Bowman. She succumbed to a lengthy illness on Friday, December 27, 2019 at Georgetown University Hospital in Washington, DC. Billie was educated in and graduated from the Washington, D.C. Public School System. She built a multi-faceted career serving her community and all whom she encountered. She entered the workforce in the Federal Justice System, working at the United States Probation Office as a Clerk Typist. After several years in that position, Billie transitioned professionally into the legal field. She remained in this field for more than 40 years, until her retirement from Wilmer, Hale & Dore in 2017. Because of Billie’s commitment to serving others, she prayed and asked God what He wanted her to do and God answered, “Feed My People.” Billie heeded God’s Instruction and, using her own funds to buy food and supplies, she went downtown Washington, D.C. searching for the Homeless. She started out feeding 60 people and grew her service to feeding over 150 people in the Homeless Community every third Saturday of the month. Approximately two years later, Billie founded “Billie’s Blessings,” the non-profit entity that was born out of her answer to God’s Call. Billie comes from a spiritual family and has loved the Lord all her life. She was baptized at a young age, enjoying worship at several churches before making Grace United Methodist Church (“Grace”) her home church. The fact that Billie’s grandfather, the late Pastor Benjamin F. Hall, was one of the founding members of Grace, contributed to her decision to become a member. During her membership at Grace, Billie served in several Church Ministries. She was a reliable member of the Tribe of Levi, serving as Recording Secretary until she was no longer able. She was a dedicated member of the Hospitality Ministry and served the Usher Ministry as a faithful Church Usher. She was always willing to lend a hand to other Ministries when requested. Billie was married to Dexter Brown on July 26, 2007 in Clinton, Maryland. Together, they enjoyed traveling to different parts of the world. Billie also loved traveling with her children and grandchildren, hand-dancing, cooking (especially baking!), and spending time with her friends and family. Willa (“Billie”) Brown leaves to cherish her memories her devoted husband, Dexter Brown; four children: Gina B. Dent (Denisa Collins), Lisa Brown, Lance Randall and Maelena Williams (Dominique); four grandchildren: Gabrielle Brown (Jeremy Chew), Teffy Dent, Clifton Simms and Madison Eldridge; four great-grandchildren: Dallas Patterson, Teffy Dent III, Mathias Williams and Reigna Dent; four siblings: Maria Terrell, Charles Bowman, II (Gloria), Andre’ Bowman (Angie) and Lessie’ Seals-Johnson (Jeffery); and a host of other relatives and friends. Preceding Billie in death are her mother and father, Charles Bowman, Sr. and Teresa Bowman; one brother, Jasper Bowman; one sister, Robin Minter; two grandchildren, Reigna and Reigan Dent and one son-in-law, Teffy Dent, Sr. Billie was a good friend and nurturer who forged deep and lasting relationships. Betty Jean Amos, Beverly Green, Alice (“Bay Sis”) Jones and Susie Redmond Moore are four of her long-term “Soul Sisters” who, together with Billie’s goddaughter, Freddi Brown, join the ranks of her many friends and family to share the tremendous burden of Billie’s absence. A woman of God who was loved and respected by all who knew her, Billie Brown has been a blessing to many. She will be sorely missed.

Willa (&#8220;Billie&#8221;) Brown was born on November 25, 1949 in Washington, D.C., to the late Charles Bowman, Sr. and Teresa Bowman. She succumbed to a lengthy illness on Friday, December 27, 2019 at Georgetown University Hospital in Washington,... View Obituary & Service Information

The family of Ms. Willa Lee Brown created this Life Tributes page to make it easy to share your memories.